In Step with Golden State

August comes from the Latin word augustus, meaning “consecrated,” “venerable,” or “auspicious.” Good to know! But in the world of Golden State Versatility August means “three more shows before the Western States Finals in Las Vegas!”

In this issue, results and pictures from the “World Show” and the new Golden Hills Farm Show. Our last installment from judge Bozo Rogers is featured (he makes it sound so easy to get that coveted 70 in reining) and a heads up for a competitor favorite–Vanessa Lawrence’s Paso Pastures Playoff at Paso Robles Pastures. Also, a special feature for the Peter Smoot Memorial Versatility show is highlighted.

We have a new feature–“You Be the Judge.” A common showing problem is presented with several answer choices. Be the first with the correct answer and receive a $25 VISA gift card. If you have encountered showing problems/questions (and if you haven’t, you haven’t shown!) please share them with us for a future issue.

Finally, a quote of the month that is particularly useful if one shows in the Southwest.

Have an august August. Be venerable! 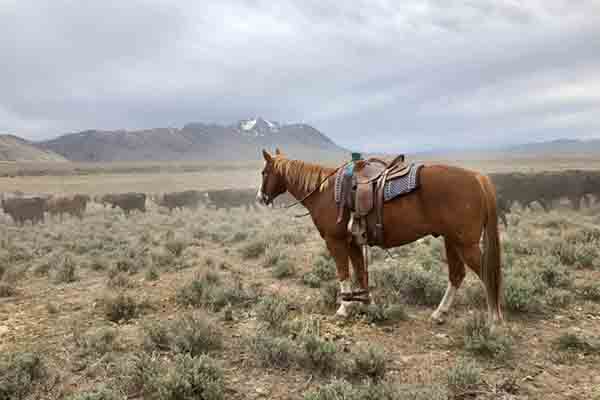 A scene from member Renee Jackson’s Nevada ranch The YP 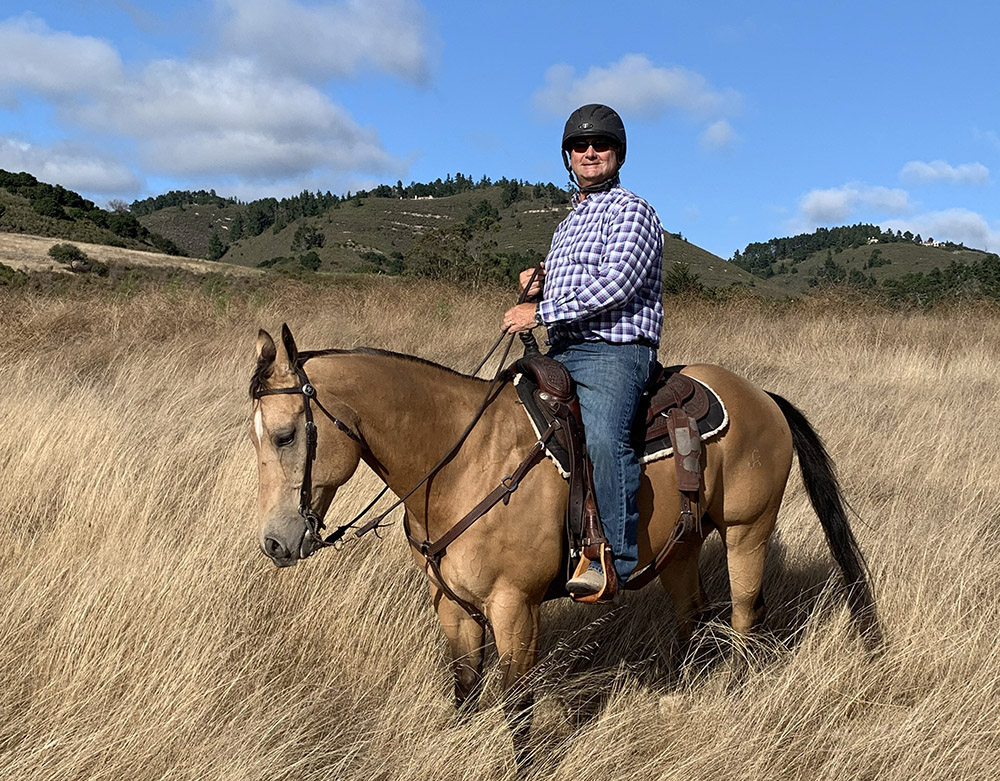 We hope to see you at the Peter Smoot Memorial Show August 13-14 in Carmel Valley. We will be honoring Peter and his family with a special Grand Entry Sunday morning before the Cutting. Please plan to be a part of this special event as Peter’s family, including his horse Dillon, will be in attendance.

The left side of the country was well represented at the AQHA/NSRHA/Ranching Heritage World Show in Guthrie, OK. When one remembers that it’s a huge win just to get there and compete, Golden State members really excelled! Members/horse’s name/results follow:

Alexi Connell / Nics Back in Black 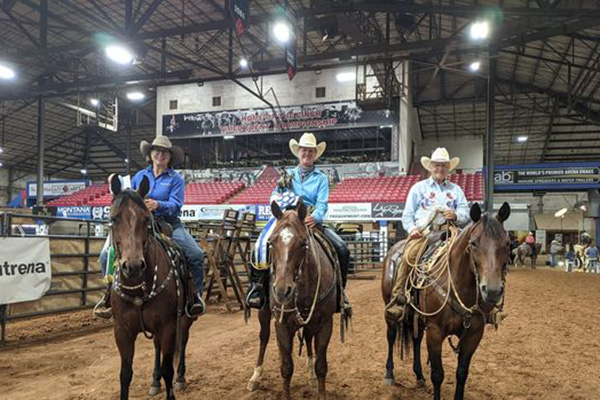 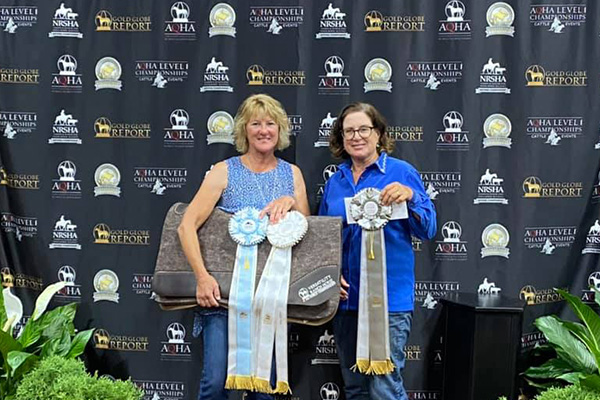 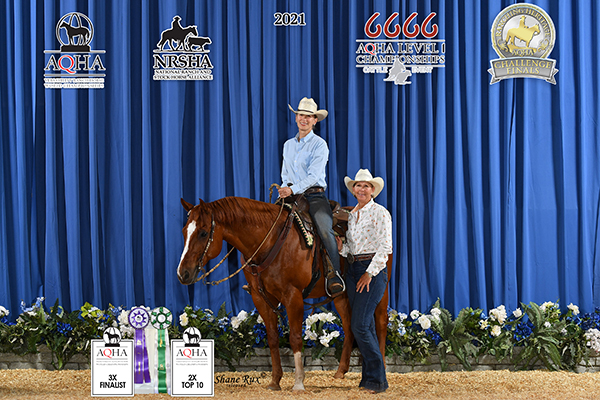 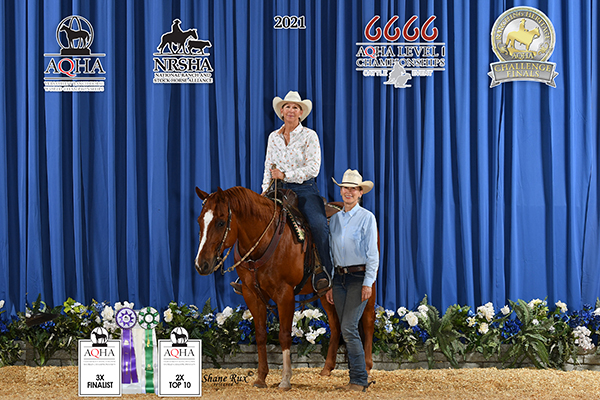 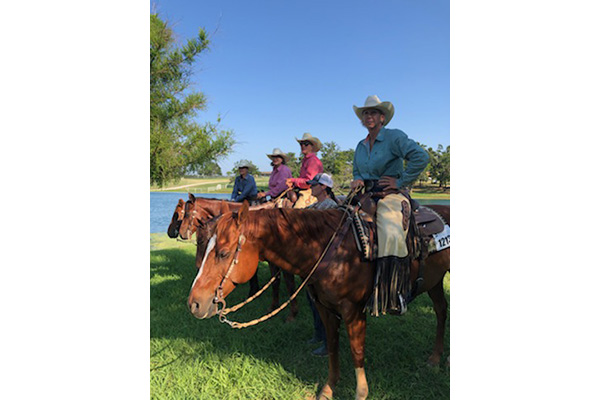 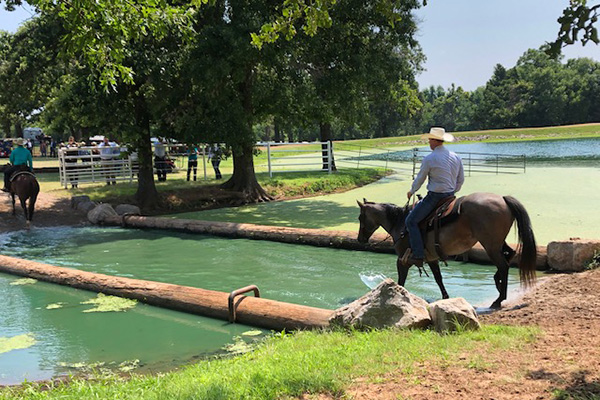 Oklahoma Governor Kevin Stitt trying out the water obstacle. What a cool governor! 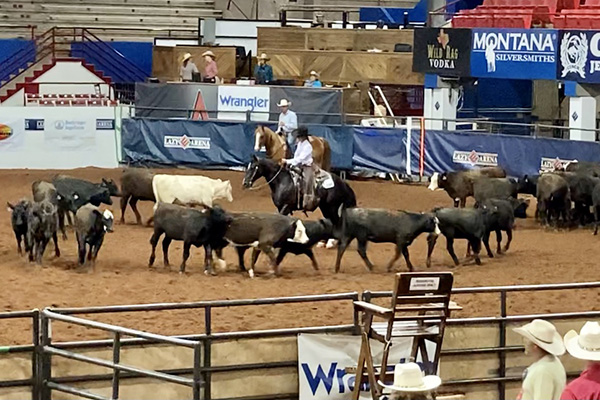 From the Judge’s Perspective 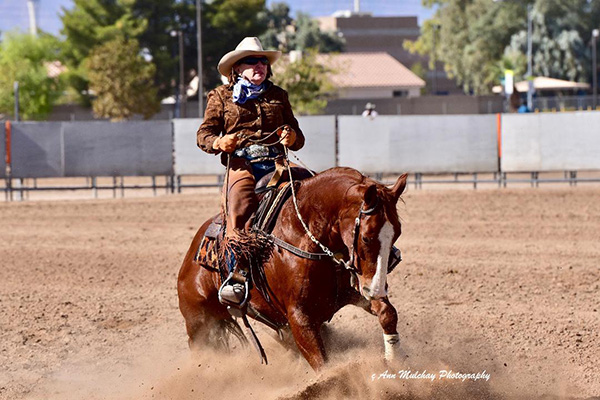 The reining is probably the simplest of all the classes, yet many unnecessary penalties occur. Most of which are rider errors. Probably the most common and costly is not going past the markers before stopping, a 2-pt. penalty. Next is loping off on the wrong lead then breaking gait to correct it, a 1 and a 2-pt. penalty. Missing a lead change and not realizing it for a full circle is also very costly. Normally all of these are rider errors. If you stay on pattern and execute each maneuver reasonably correctly, chances are you will probably mark a 70.

You Be the Judge

The Question? You are doing a reining pattern and your horse travels sideways while spinning. Because of where you end up, your next run down to stop “past center marker” can’t be down the center. The result is that it will be difficult to back up to “X”, the point in the dead center of the arena, to begin your figure eights. What do you, as the rider, do?

Submit your answer to JumperDawn@aol.com. Member with first correct answer will win a $25 Visa gift card. Answer and explanation in next issue.

Vanessa Lawrence, owner and show manager of Paso Robles Pastures, is known for putting on a great show. As the pictures illustrate, it’s a family affair. Her ranch lends itself to efficiency, the large pen is spacious, has great footing, and a great view! Ditto the cutting pen. An added bonus is getting to see all the beautiful Ryker (Step To The Light) babies living there. Don’t miss it, September 4 & 5. Entry information is out on our Golden State web site. 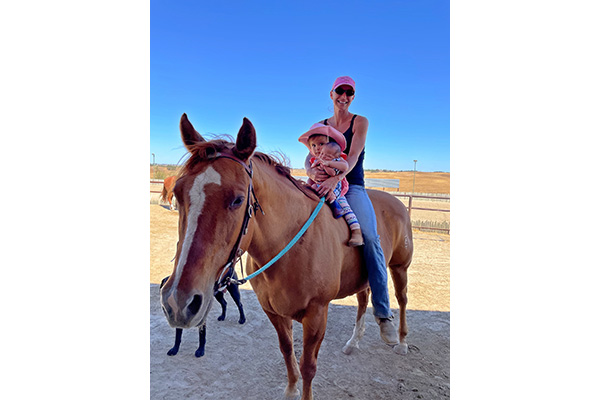 Vanessa with her grand niece and great grand nephew. It's never too early to begin the horse passion! 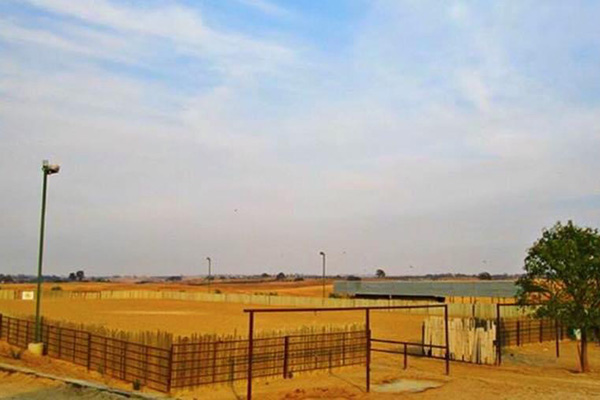 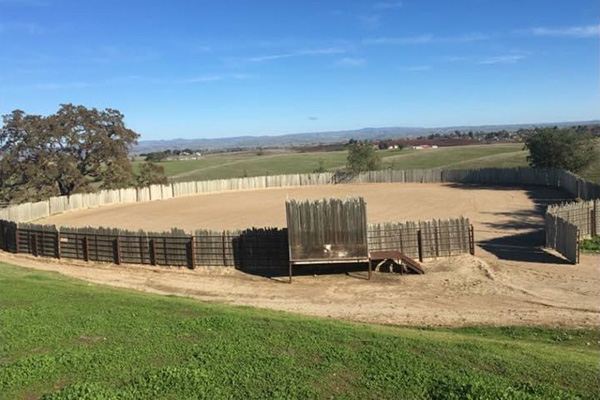 Sit on the grassy hillside, watch the cutting and enjoy the view 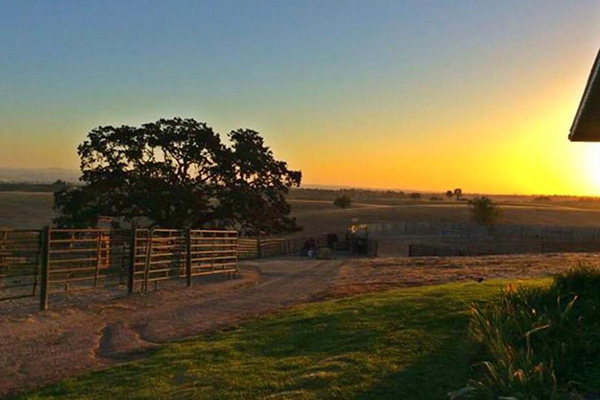 At the close of day, enjoy a beautiful sunset

By Every Measure a Great Success

As a result of clever scheduling on the part of show manager Amanda Ray, what could have been intolerable heat, was made bearable. Everyone worked hard to make for a well-run, well-organized, fun show. With the first show such a success, we can’t wait to see what their next effort will bring. 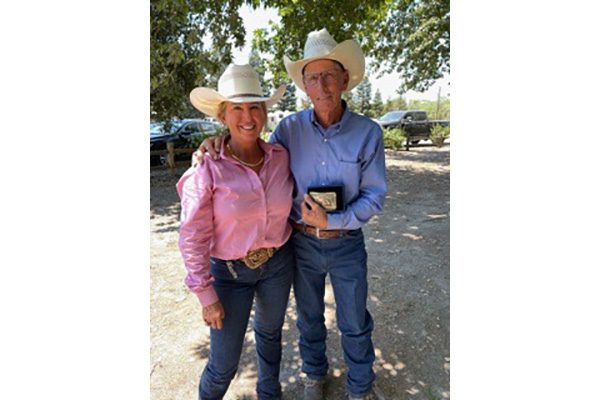 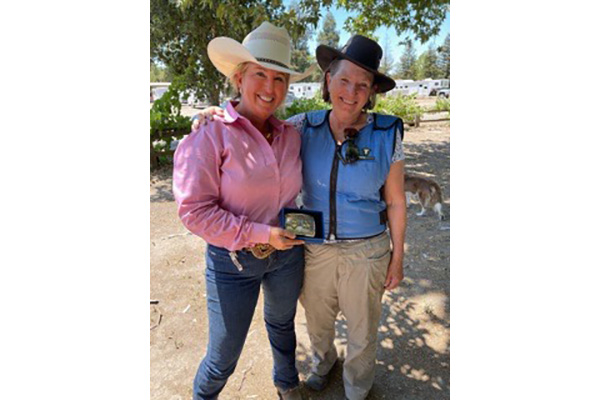 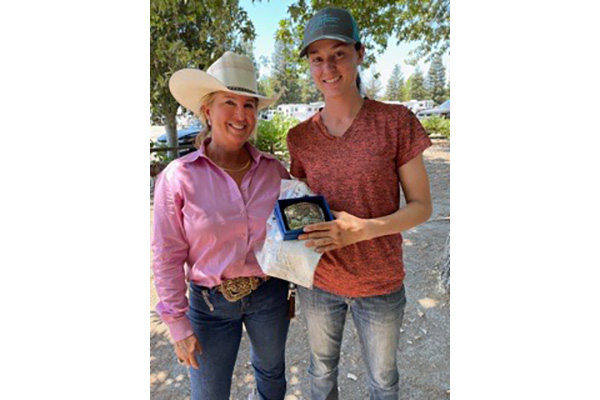 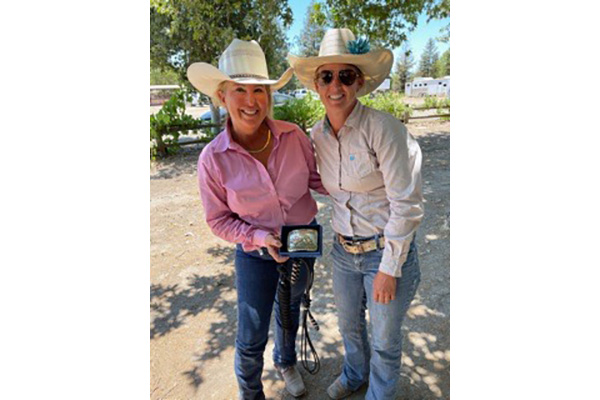 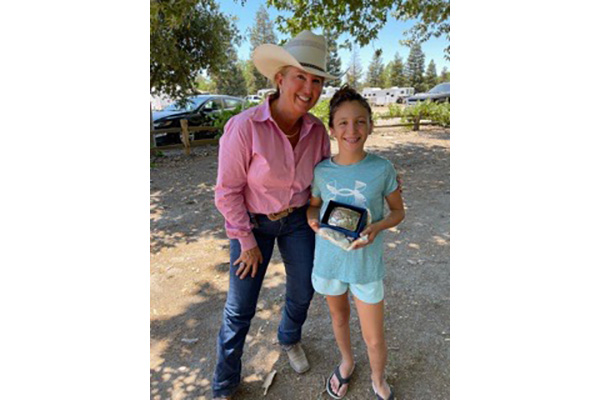 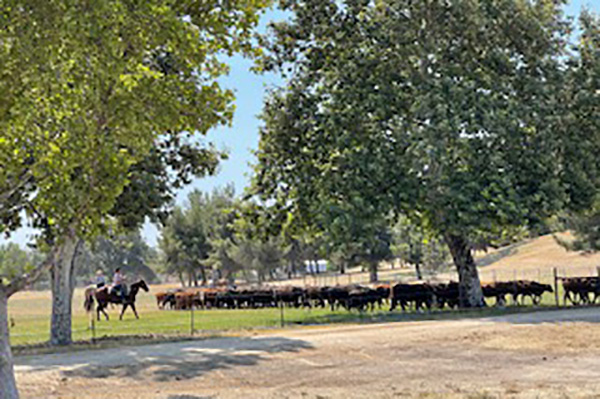 Bringing in the cattle for the show 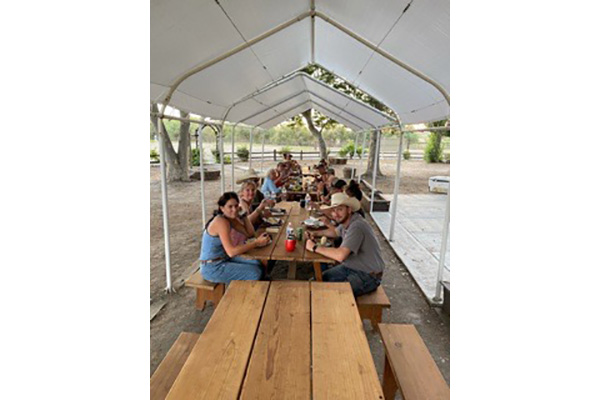 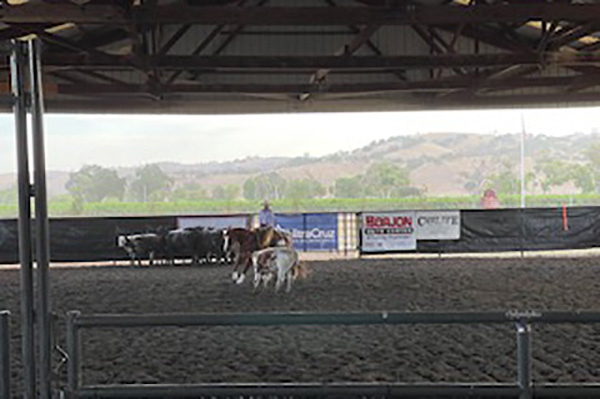 For more information, click here to view the complete calendar in a new window

Quote of the Month 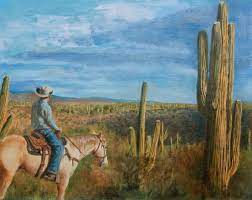 “If you get thrown from your horse you have to get up and get right back on. Unless you land on a cactus; then you have to roll around and scream.”